The NEST CoWork space is home to a slew of tech start-ups, entrepreneurial efforts, and non-profit organizations looking for a supportive, yet independent work space. CyberTECH and NEST are sibling companies working together to build a better workplace model here in San Diego. CyberTECH has recently hosted a series of planned and impromptu events that build and enhance an environment of innovation at 1855 First Avenue.

The (unofficial) fun began with a weekend painting party as NEST expanded on the first floor of the First Avenue space. After breaking down some walls, the original CyberHIVE space quadrupled in size. Members gathered together on a Saturday to paint, drink lattes, and interact while taping and painting. By the end of the day, the halls and walls of the new offices transformed into a colorful array of warm spaces and airy collaborative offices.

Next up – sliders and fries. Thanks to a food truck parked out front, CyberTECH was able to offer new and future members great food. Plus, on the side patio, resident businesses participated in a speed networking event. With just 60 seconds to pitch, each business owner had the chance to talk up their daily efforts to more than 20 other businesses operating within the same building. That night ended with an extended concert of local artists performing on the interior patio.

With so many new members moving into the NEST spaces, CyberTECH knew it would take a few events before all faces became familiar ones. And nothing brings people together like ice cream (or beer). But ice cream was on the menu for a last minute, Thursday afternoon social on the patio to celebrate the warm summer days.

Fast forward a few weeks, and CyberTECH brought everyone together for a spaghetti dinner complete with garlic bread and Caesar salad. Shortly thereafter on the same night, another speed networking event meant those who had missed out on the prior roundup could pitch their business plans. And those who had met during the last networking roundtable had the chance to delve a bit deeper. Finally, the evening ended with cigars around firelight on the back patio.\

CyberTECH seeks to build a deeper meaning for CoWorking with its events and comfortable atmosphere. On any given day, you can find workers taking a break from the glare of a computer screen to chat at the coffee bar or outside on the patio. With big TVs, comfortable chairs, and a killer WiFi signal, the NEST CoWorking spaces have set a new standard for coworking in San Diego.

Take Advantage of our Current Offers 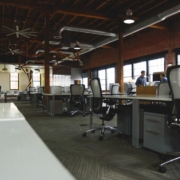 Picking Your Workplace: Finding the Niche for your Business